“ Revealing the truth is like lighting a match, it can bring light or it can set your world on fire.” Wiz Khalifa The loss of an ideal, for me, […]

The Girl from Christmas Past

My mom worked at least two jobs for as long as I can remember during my growing up years. It was difficult as a single woman raising three kids on […]

I didn’t want hominy again.  In fact I felt like if I had to eat one more bite I would vomit. At nine, I did not realize the reasons behind the third day of having to eat the yellow, round kernels of grit I was trying to focus on chewing and swallowing. I was just tired of it.  I wanted […]

I walked the beach today. My knee protested the attempt of a run. Ahmaud shares a birthday with my Natalie. As we celebrated her I couldn’t help thinking about his mama. How heartbreaking this day has been for her. In my sadness though I have new hope. Hope with the arrest. Hope in the prominent Christian leaders who have chosen […]

Best Buddies sponsors a prom every year at a local hotel. It is one of Tres favorite events. Best Buddies continues to be an organization that brings joy and new friendships into his life.

Days seem so long in the hospital. It’s impossible to get a good nights sleep with the constant interruptions. I completely understand the medical staff have to do their jobs. I used to be the one waking people up for assessments. Understanding the need doesn’t help when we’re walking around like zombies through the day. Still I am blessed that […]

Laughter is the best Medicine

One of the IV medications given to Tres during his procedure is well known for causing people to be quite loopy as it wears off.  At the suggestion of one of his doctors we started looking up funny over anesthetized kids on  +YouTube.  Soon everyone who visited had new suggestions of hilarious videos we just had to watch.  The videos definitely helped pass […]

Tres had complained of a pain in his right side for a few days.  It would come and go.  His pain tolerance is very high and when he says something […]

Our neighbors threw a neighborhood Christmas party. We are still getting to know everyone so it was the perfect time to hang out with the whole block in one spot. […]

To Have a Voice and FINALLY be heard!

Amazing, God driven events have been unfolding in Tres education.  As I referred to here we have had some recent frustrations with a charter school we tried to get Tres enrolled in.  Good friends of ours were recently at a restaurant were they over heard a reporter discussing research that his company was doing on Charter Schools in Florida.  Our friends shared in the struggles their […]

Anyone who reads my blog knows about the many transitions and adjustments we have had to make concerning Tres education.  His elementary school years were wonderful.  Middle school was great.  […] 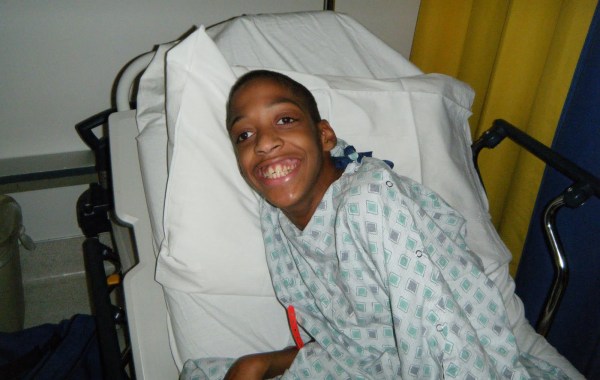 Just before surgery Day 3…visit from the sibs Day 3…snuggle time with mom and dad Yeah!! He is home! Tres hip procedure came much earlier than expected. His doctor’s office […]

A series of Unfortunate Events

One of the twins, Scooter, broke Tres leg the last week of May. I still can NOT believe it. Tres, Jordan, and the other million boys in our neighborhood were playing at the park across the street. Jordan runs in the house and says, “Tres is hurt.” I knew it was not good due to the moisture build up around […]