Tres had complained of a pain in his right side for a few days.  It would come and go.  His pain tolerance is very high and when he says something […] 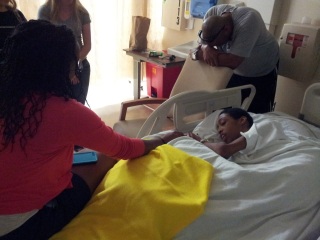 Tres had complained of a pain in his right side for a few days.  It would come and go.  His pain tolerance is very high and when he says something hurts, it REALLY hurts.  I took him in to an emergent clinic thinking we would get a quick x-ray to make sure everything was ok.  The doctor listened to his lung sounds and looked at me.  “I can’t hear any lung sounds on his right side.”  I don’t have to tell you how terrified I was upon hearing this.  I tried to keep my face neutral and quickly took Tres to the Emergency Room where x-rays and labs could be completed.  The ER doctor overheard me speaking to the admissions nurse and sent us straight to x-rays.  Mind you at this time Tres is in his wheel chair looking completely normal chatting with a friend on Facebook.  How bad could it be right?  After the first x-ray the technician asked me to reposition Tres because the film showed his heart on the wrong side. We readjusted and took another picture.  This time the tech did not say anything. We were guided to a room and informed the doctor would be there soon. No more than a few minutes later the doctor was back asking to speak to me privately.  I listened as he informed me that Tres right lung was collapsed.  Although my son looked fine at the moment he could not guarantee how long his condition would remain stable.  The trauma team had already been called and Tres would need a chest tube placed STAT to remove the air and allow the lung to inflate.  I heard his words but I had a hard time processing them.  Chest tube, great amount of pain, no anesthesia due to lungs already being compromised, can you sign these papers…..I desperately wanted to fall apart. Then I looked at Tres. He needed me. The moment wasn’t about my fear. I walked back in the room and told Tres the gist of the conversation. I asked him if he wanted me to be there during the chest tube procedure. In my mind I thought “please say no!” I didn’t want to have to watch him go through the pain. Of course he said yes. I assured him I would be there the whole time.  In the surgical unit with us were two doctors and a nurse. Tres was  given IV pain meds to try to dull some of the pain. As the doctors started prepping for the procedure I felt God telling me to lock in with Tres.  To give Tres all my attention and not to even look at the doctors.  He was scared and asked me to pray. After we prayed he asked me to go over his favorite bible verses. I stayed right in his face as verse after verse popped in my head. I remember his eyes as I said,” Yeah though I walk through the valley of the shadow of death, I will fear no evil.”  I told him, “we will fear no evil Tres”. He nodded in agreement with solemn eyes. I thought as I was speaking to Tres how quiet the doctors were as they allowed me to keep Tres attention.  Then I heard the most amazing words. “We are done.” They had placed a chest tube in Tres and he had not even flinched let alone let out the piercing scream the my body had been so ready to react to.  The doctors were amazed, I was amazed. Tres smiled, put his hands together, and asked me to thank God.  The lessons I learn from this kid. Unfortunately this procedure was just the beginning and he ended up having to have surgery after the lung collapsed a second time.  Throughout the time he spent in the hospital our family and friends rallied behind us.  We were especially blessed to have my Mom and my sister Brandy fly in.  There is something about my mom being by my side that reassured me that everything will be fine. Friends fed my family.  Tori and her amazing Intervarsity community took care of the kids while Maurice and I stayed with Tres. The love that was poured out to us during this time was all-encompassing.  I am so very grateful to all who stopped their life to help us walk the bumpy part of ours.

#mothersdaytea #pinkiesup
#mothersdaytea #momsanddaughters
#seniorprom #alldressedup
#duantewright #sayhisname #welament
I wrote a story prompted by my writing group. It's about church, community and racism. Since I published it on my blog I have had so many people reach out with the same shared experience. It's been comforting. Then I found out there is a whole movement of people sharing their stories of leaving church spaces that refuse to respond to racism and injustice. Thank you @thewitnessbcc. To read my full story: www.atribecalledwhitlock.com or hit link in bio.
Too close? Just making sure ya'll see these curls. Had my favorite curly girl expert @torrensalicia cut the back of my hair (looser curl pattern) even with the tightly coiled girls at the top. Love the shape that was created. Ima release the desire of length for a fuller style. #curlygirlmethod #natural #innersence