We all met at the airport in La Gardia. People had told us before that it would be easier to fly into New Wark N.J. It was $100 cheaper to […] 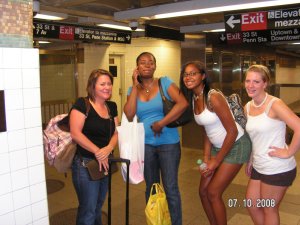 We all met at the airport in La Gardia. People had told us before that it would be easier to fly into New Wark N.J. It was $100 cheaper to fly in La Gardia so we bi passed the advise. That was our first very large mistake. Our hotel was on the opposite side of New York in New Jersey. We would have to take 3 modes of transportation to get to there. Our travel guide ( a friend from Hawaii who happened to be staying with her family in New Jersey at the time of our stay) told us to catch the city bus, get of on 127th st and catch the metro. We seen that there was 2 different city buses. We asked and found out one was the Express bus that made fewer stops but cost $12, or we could take the $3 bus. We chose the cheaper bus, mistake number 2. Once we got to 127th st we realized there were were numerous stops, each one blocks from the other. A nice lady explained to us which stop on 127th to get off on. Once there we realized that we were standing smack in the middle of Harlem. I could have cried laughing watching as culture shock took hold of my fellow travelers. Jill exclaimed, “don’t loose Hillary” I cracked up again…Jill and Hillary were the only people of Caucasian descent for miles around. We were not going to lose sight of her! I had mistakenly thought that I have lived in vary diverse cities. First Honolulu and now Tampa. New York is like going to a different country. It was rare to hear someone without an accent.

Once we got on the metro we were told to go to Times Square. Once there we were to take the PATH to the New Jersey transit. We made it fine to Times Square. Once we got there we started looking for a path to walk on to get to the transit. Jill was on the phone with our guide as we questioned people around us as to were this path was. Finally a very nice lady (shown in the pic above on the cell phone) took the phone from Jill and asked our guide exactly were was she trying to get us to. Once she had the information she told us she was going to take us to were we needed to be! It was completely out of her way. We were so grateful to her and my preconceived idea that New Yorkers were mean went right out the window. We FINALLY made it to our guide about 4 hours, a city bus, a metro, and a train later. Her and her father graciously dropped us off at our hotel in New Jersey. What a first night.