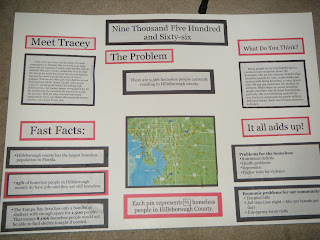 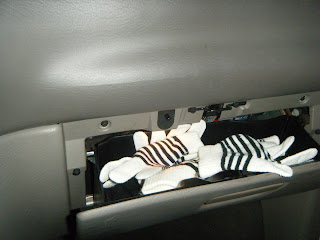 Last year we read a book called Gideons Gift.   I wrote about it here.  It made a big impact on our family and we thought about it this year as we started heading into the colder months for Florida.  The book was about a man who had lost what he felt was everything worth living for.  He gave up his life and lived on the streets with nothing to hold on to but a pair of red gloves.  Hold that thought.  Tori came home with a trifold poster she had made for one of her classes and her subject was the homeless population of Tampa.  Seeing how many homeless we had right here in our community was shockingly sad.  What could we do to feel like we were helping?  I was walking in Old Navy and everything came together.  In a big ben next to me was a sign for 2 for $1 gloves.  Bingo!  I grabbed the ones they had and went home to share my idea.  I thought it would be great to put gift cards in the gloves and let the kids help me hand them out to the people we passed on a daily basis holding signs and sleeping on benches.  Our first day out and about the kids were looking everywhere for someone to give the gloves too.  We pulled up at MacDonald’s and Jordan seen a man being asked to leave who had been setting in the building for warmth and could not buy anything.  That moment created a stirring conversation on the limited amount of shelters and the overwhelming amount of people and some families who have to deal with the different weather conditions. As the days went by and we handed out the gloves I realized that something happened with my clan that I was not expecting.  When they were looking for people to hand their gloves to they were also becoming  increasingly aware of the gentleman on the bench, or a woman pushing a cart or even the man sitting under the tree.  I am not sure they would have ever noticed them before. They also learned that we may not have much, but we CAN make a difference is small ways.  What a great lesson, and one that I could have never have taught at home. #homeless #awareness #family